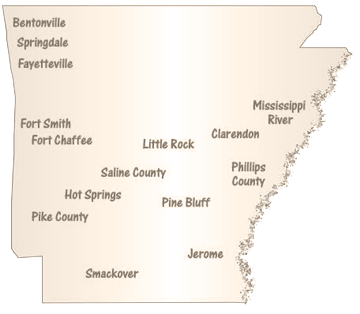 1900 — Little Rock: The cornerstone for the new state capitol is laid on November 27 on the former grounds of the state penitentiary overlooking downtown Little Rock. By the end of this year, forty-two Arkansas counties will have banned liquor sales.

1903 — On A Slow Train Through Arkansasw is published. A collection of hillbilly and racial humor with little connection to Arkansas realities, it nevertheless contributes to popular perception of Arkansas as an eccentric, ignorant rural backwater. Although there are only fifty automobiles in the entire state, their owners form the Arkansas Good Roads Association to promote route construction, repair and maintenance.

1906 — Pike County: Diamonds are discovered in Pike County, the first such deposit to be found in the United States.

1917 — Arkansans muster in for service during the First World War; approximately 72,000, including African-Americans and women, will serve. Some 2,000 will die, most from disease and accidents.

1919 — Phillips County: A race riot erupts in Elaine (Phillips County) in October. Between 30 and 100 deaths result; the riot leads to an investigation, convened by Governor Charles Brough, of the issues dividing black and white Arkansans.

1921 — Smackover: Oil is discovered near Smackover.

1925 — The state Supreme Court rules in Brickhouse v.Hill that Amendments 7, 8 and 9 (initiative and referendum, woman suffrage and an enlarged Supreme Court) are all in effect.

1927 — Mississippi River: Floods scour farmlands and cities along the Mississippi.

1928 — Arkansas has over 8,700 miles of roads, one-fourth of them paved. Forty-six counties feature some paved roads; two counties have no improved roads at all.

1931 — By the end of this year, nearly half the Arkansas businesses operating in 1929 are closed, including 192 banks.

1932 — Little Rock: Mrs. Hattie Caraway, named in 1931 to fill out the Senate term of her deceased husband, wins a term on her own in November, the first woman elected to the United States Senate.

1936 — Little Rock: The Waterbury Clock Company opens a facility in Little Rock; later renamed US Time and, finally, Timex, the facility will be the last remaining American manufactory of wrist watches by the time it closes in 2001.

1939 — Saline County: The Magnet Cove Barium Corporation begins mining in Saline County. By 1941 the mines produce a high-grade barite powder for the nation’s oil industry. Louise Loughborough, a Little Rock socialite and civic leader, begins the task of preserving vintage structures in the heart of the city slated for demolition. Her efforts will lead to the opening, in 1941, of the Arkansas Territorial Capitol Restoration, known today as the Historic Arkansas Museum.

1941 — After the attack on Pearl Harbor, Arkansans flock to recruiting stations to join the war effort. Some 200,000 Arkansans will serve; 4611 will die in service.

1942 — Internment camps for West Coast Japanese-Americans are established near Jerome and Rohwer.

1942 — Fort Smith/Jerome: Fort Smith native William Darby is given the job of training the Army’s Ranger Battalion, elite fighters for the toughest assignments. Darby’s Rangers see their first action in North Africa in late 1942, then in Sicily and Italy in 1943. Darby dies in action in 1945.

1946 — Hot Springs: In an early round of the “GI Revolt,” decorated former Marine Sidney P. McMath runs against the Hot Springs political machine for Garland County prosecuting attorney and wins.

1948 — Little Rock: Sid McMath is elected governor on a reform platform. Although hampered in some efforts, McMath places African-Americans on state boards for the first time since Reconstruction, promotes highway construction and encourages industrial siting in Arkansas.

1953 — Hot Springs: The Hot Springs Bathers baseball team signs Negro League stars Jim and Leander Tugerson, the first African-Americans to play professional ball in Arkansas. The team is evicted from the Cotton States league, then readmitted after the Tugersons are declared ineligible to play.

1958 — Little Rock: Little Rock high schools are closed for the academic year while political and social controversy over desegregation continues.

1968 — Little Rock: In a special session in February, the General Assembly passes 67 bills, including a freedom of information act and the state’s first general minimum-wage act. In November, Arkansans ratify Amendment 53, authorizing kindergartens in the state’s free public schools.

1969 — Fayetteville: The University of Arkansas establishes a multi-campus system.

1970 — Little Rock: Dale Bumpers of Charleston is elected governor, promising to rid Arkansas of “the old machine and the money machine.” In February, a federal judge declares the Arkansas prison system unconstitutional.

1980 — Bill Clinton/Fort Chaffee: Arkansas is ranked in the top five states in percentage of population over the age of 65, due to the “Retiree Movement.” In May, the Federal government informs Governor Clinton that Camp Chaffee will house 120,000 Cuban “Freedom flotilla” refugees. Bill Clinton is defeated by Frank White, once a Democrat, in his bid for a second term as governor.

1983 — Little Rock: The Quality Education Act is passed by the General Assembly; education once again becomes a widely-discussed issue within Arkansas.

1986 — Bill Clinton: Clinton again is re-elected, this time for a four-year term.

1988 — Mississippi River: The Mississippi Delta Commission is created with the mission of investigating and improving

1990 — Bill Clinton/Springdale: Governor Clinton wins a fifth term as governor. Latinos are Arkansas’ the fastest-growing minority population. Tyson Foods of Springdale is the largest broiler chicken processor in the nation.

1991 — Bill Clinton: On October 3, Governor Clinton announces he will run for the presidency of the United States. Lt. Governor Jim Guy Tucker becomes acting Governor in Clinton’s absence. October 18 sees the last issue of the Arkansas Gazette, the “oldest newspaper west of the Mississippi.”

1994 — Jim Guy Tucker is elected governor; Sharon Priest is the first woman elected to the office of Arkansas Secretary of State.

1996 — Bill Clinton: Republican Tim Hutchinson is elected to the U.S. Senate, the first of his party in over 100 years to represent the state in Washington. Governor Tucker resigns his office in July and is succeeded by Republican Lieutenant Governor Mike Huckabee. In November, Bill Clinton wins re-election to the Presidency.

2000 — Arkansas returns a Republican majority in the Presidential vote.

2002 — Bentonville: Bentonville-based Wal-Mart is identified as the world’s largest corporation.

2007 — Little Rock: Little Rock Schools are released from federal supervision, nearly 50 years after President Eisenhower sent troops to escort nine black students into all-white Central High. The Arkansas Travelers of the AA Texas league debut in their new home, the Dickey-Stephens Field, on the banks of the Arkansas River in North Little Rock.

2010 — Jacksonport State Park: The weight of heavy snowfall causes the Mary Woods No. 2 steamwheeler to sink in the early morning hours of January 31 on the White River.

2012 — In the General Election, Republicans gain the majority in both the state House of Representatives and Senate for the first time