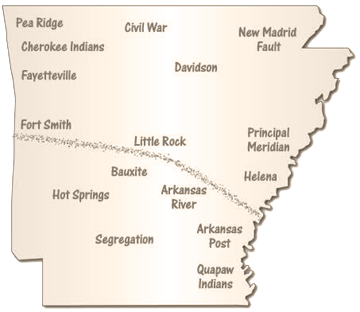 1800 - French/Spanish: On October 1, French and Spanish diplomats sign the secret Treaty of San Ildefonso, which returns Louisiana to French control.

1801 - Spanish: In June 15, Juan Manuel del Salcedo arrives in New Orleans to take up his duties as the last Spanish governor of Louisiana, unaware that France now owns the province.

1803 - French: American diplomats James Monroe and Robert Livingston negotiate to purchase New Orleans, to ensure continued American shipping rights. The French government offers them all of Louisiana, at a negotiated price of fifteen million dollars. By this purchase, present-day Arkansas becomes part of the United States.

1804 - French: On March 24, President Thomas Jefferson approves an Act of Congress dividing the newly-acquired former French colony into two parts: the Territory of Orleans and the District of Louisiana (which includes present-day Arkansas).

1804 - Hot Springs: At the behest of President Jefferson, William Hunter and George Dunbar explore the southern portion of the District of Louisiana, ascending the Ouachita River as far as “the Valley of the Vapors”–today’s Hot Springs.

1806 - The southern part of the New Madrid district of Louisiana Territory is split off and named “District of Arkansaw.” The district will not have civil officers until 1808.

1810 - A special U.S. Census of Arkansas reveals over 1,000 persons living in the district, not including Native Americans.

1811 - New Madrid: On December 16, the New Madrid earthquake strikes, rendering many homeless and causing land subsidence along the Mississippi.

1812 - On May 6, President James Madison approves an act setting aside six million acres of land to be surveyed, divided and used as bounty lands for soldiers enlisting to fight the British invasion, or to be given to those displaced by the New Madrid earthquake. Approximately one-third of the bounty lands are in the present-day boundaries of Arkansas.

1812 - On June 4 Missouri Territory, including Arkansas, is created by Congress.

1813 - “Arkansas County” is created by the Missouri Legislature.

1815 - Principal Meridian: President James Madison orders a survey of the Louisiana District in order to divide and distribute military bounty lands. Surveyors Prospect K. Robbins and Joseph Brown establish the principal meridian and baseline for subsequent surveys of Louisiana Purchase lands beginning on October 27, at an initial point located in a headwater swamp where present-day Lee, Monroe and Phillips Counties intersect. Arkansas, still part of Missouri territory, is divided into two counties: Lawrence, north of the Arkansas River, and Arkansas, mostly south of the stream.

1817 - Cherokee Indians: Arkansas’ first post office is sited at Davidsonville, in Lawrence County. The Cherokee are given lands in northwest Arkansas in exchange for their home lands in Georgia and Tennessee. Fort Smith is established at Belle Point, on the Arkansas River.

1818 - Three new counties (Clark, Hempstead and Pulaski) are carved from Arkansas County. The Quapaw are persuaded to give much of their land south of the Arkansas to the United States.

1819 - Arkansas Post: On March 2, President James Monroe signs an Act of Congress creating the Territory of Arkansas. On July 28, the first Territorial Legislature meets at Arkansas Post. On November 20, William Woodruff publishes the first edition of the Arkansas Gazette, also at Arkansas Post.

1820 - Arkansas Post: On February 7, the first elected Territorial General Assembly meets at Arkansas Post. In March, Amos Wheeler opens a post office at Little Rock. On April 20, the “Comet,” first steam packet to travel up the Lower Arkansas River, ties up at Arkansas Post . In October, General Andrew Jackson signs a treaty with the Choctaw nation, granting the Choctaw lands in western Arkansas.

1821 - Little Rock: Books promoting the beauty and potential of Arkansas are published by explorers Henry Schoolcraft and Thomas Nuttall. On June 1 the territorial government, seeking higher ground for a home, moves from Arkansas Post to Little Rock.

1824 - Quapaw Indians: The Quapaw are forced to cede their remaining lands south of the Arkansas River to the United States.

1826 - Helena: A smallpox epidemic, one of many, reaches Arkansas. Arkansas’ first steam-powered sawmill opens in Helena.

1828 - Cherokee Indians/Little Rock: A post road between Little Rock and Memphis is under construction; the Cherokee are persuaded to give up their northwest Arkansas lands and to move further west.

1832 - Arkansas Post: Author Washington Irving visits Arkansas Post; it will inspire his essay, “The Creole Village.” Of its inhabitants Irving notes: “The almighty dollar, that great object of universal devotion throughout our land, seems to have no genuine devotees in these peculiar villages.”

1833 - Little Rock: A new “courthouse” for the territory, to become the first state capitol, is under construction in Little Rock.

1836 - Arkansas becomes the twenty-fifth state of the Union on June 15; James Conway is elected its first governor.

1840 - Little Rock: The Federal government begins construction of its Arsenal in Little Rock.

1846 - Congress declares war on the Republic of Mexico; Arkansas raises a regiment of volunteer cavalry, commanded by War of 1812 veteran Archibald Yell.

1847 - On February 23, Arkansas troops participate in the battle of Buena Vista. Faced by a larger Mexican force, the Arkansas troops break and run until rallied by Yell, who is killed in the action.

1853 - Little Rock: Arkansas’ first railroad, the Arkansas Central, is chartered by the Legislature.

1859 - The School forThe Blind is authorized by the Assembly.

1862 - Pea Ridge: The battles of Pea Ridge (March) and Prairie Grove (December) are fought, both ending in Union victories.

1863 - Civil War: Federal troops occupy all of Arkansas except for the southwest portion, where the Confederate state government maintains its capital at Washington until the war’s end.

1865 - Little Rock: The Unionist government at Little Rock becomes the sole constituted authority for the state on May 26. Reconstruction begins for Arkansas, during which the state will revise its constitution twice (in 1868 and again in 1874).

1874 - Reconstruction ends for Arkansas with a month-long civil war of its own. Republicans Elijah Baxter and Joseph Brooks each claim the governorship; ultimately, President Ulysses Grant recognizes Baxter as the lawful governor.

1883 - Little Rock: The Mosaic Templars, an African-American fraternal order, is founded in Little Rock; it will ultimately spread to twenty-six states.

1888 - Bauxite: Bauxite, an ore of aluminum, is first mined in Saline county.

1891 - Segregation: The Separate Coach Law, segregating blacks and whites on trains and trams, is enacted. This is Arkansas’ first “Jim Crow” law.

1898 - Spanish: Two Arkansas regiments of infantry are mustered into service for the war against Spain.