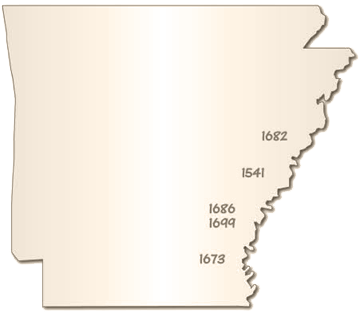 1700 - Arkansas Post: French Catholic missionaries arrive in present-day Arkansas to convert local Natives to Christianity; most Natives continue their prior observances despite these efforts.

1717 - Arkansas Post: Scottish land speculator John Law recruits French settlers for a projected colony to be built in the wilds of present-day Arkansas. Law promises a life of ease, due to deposits of gold and silver. Law is granted 87,000 acres of land near the Quapaw villages.

1721 - Arkansas Post: Seventy or eighty engagés, or workmen, recruited by John Law, arrive at Arkansas Post, only to discover it long abandoned. Welcomed by local Quapaws, the settlers stay despite finding no gold or silver.

1738- French: French regulars, militia and Quapaw and Choctaw allies begin a two-year campaign against the Chickasaw, who threaten travelers and residents alike.

1753 - French: The Seven Years’ or “French and Indian” War, breaks out in Europe, pitting France against England.

1762 - French: The Treaty of Fontainebleau (Paris) concludes the Seven Years’ War; as part of the treaty, France cedes most of its North American possessions to England; a separate, secret treaty gives parts of Louisiana west of the Mississippi to Spain.

1797 - Field of Hope: Campo del Esperanza, or Field of Hope, is established in present-day Marion in Crittenden County, opposite Memphis. It serves as a Spanish naval outpost and defense against Chickasaw raiding.