History of the Arkansas State Flag

In 1910, the keel was laid for the U.S. Navy’s newest battleship, USS Arkansas. Early in 1912, with the Arkansas’s scheduled commissioning just nine months away, the Pine Bluff(Jefferson County) chapter of the Daughters of the American Revolution resolved to present a “stand of colors” (a national flag, a naval battalion ensign, and a state flag) to the new ship. The chapter contacted Arkansas secretary of state Earle E. Hodges requesting information on obtaining the state’s flag. Hodges informed the chapter that in fact no state flag existed. The DAR chapter thereupon launched a statewide design contest to create one. Hodges agreed to chair a committee for selecting the winning design. Ultimately, some sixty-five designs—including crayon drawings, watercolor sketches, and even miniature silk flags—were submitted. Some design elements appeared on more than one entry. The apple blossom, Arkansas’s state flower, appeared in one entry centered on a field scattered with stars representing the United States, with thirteen rays recalling the original states. On another, the flower was repeated four times within colorful blocks. Another design combined the state’s outline with its great seal. One entrant memorialized territorial governor James Miller, a hero of the War of 1812, emblazoning “I’ll try, sir,” his famous battlefield utterance, upon a blue field. In early 1913, the committee met in Hodges’s office in the new Arkansas State Capitol. After due deliberation, the committee chose a red, white, and blue design submitted by Willie Kavanaugh Hocker of Wabbaseka (Jefferson County). 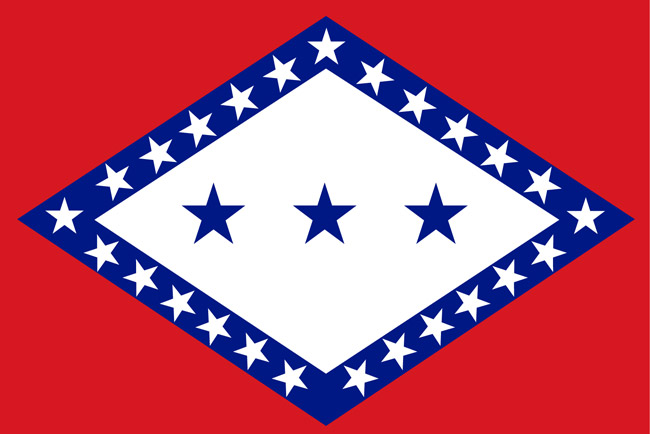 Hocker’s design featured a rectangular red field upon which was centered a white rhombus diamond bordered by twenty-five white stars on a blue band. Three blue stars, centered on the flag’s horizontal axis on a white field within the rhombus, completed the plan. The three blue stars in the center field bore several meanings: first, that Arkansas had successively belonged to three countries—France, Spain, and the United States—before statehood; second, that 1803 was the year of the Louisiana Purchase, which included present-day Arkansas; third, that Arkansas was the third state created from the purchase. The twenty-five white stars symbolized that Arkansas was the twenty-fifth state admitted to the Union. The diamond marked Arkansas’s status as the nation’s only diamond-producing state. 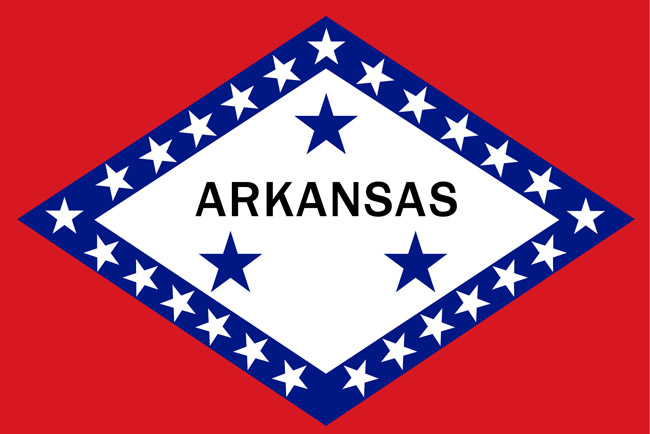 The committee decreed that the flag ought to bear the state’s name. Hocker assented and suggested that the three blue stars be rearranged, one above the name and two below. On February 26, 1913, the General Assembly adopted this design as the state’s official flag. The design remained unchanged until 1923, when the General Assembly added a fourth star to the central diamond to represent Arkansas’s membership in the Confederate States of America. At first, the stars were arranged with two above and two below the state’s name, but the Second Extraordinary Session in 1924 placed three stars below and one above, with the three lower stars arranged as an inverted triangle. A new element of symbolism was added: the twin stars immediately below the state’s name would suggest the “twin” relationship of Arkansas and Michigan, which were admitted to the Union within approximately seven months of each other, maintaining the balance between free and slave states in Congress. The Arkansas Code misstates this relationship by asserting that the states were admitted together on June 15, 1836; by the terms of an act of that date, both states were slated for admission, and Arkansas joined the Union on that date, but Michigan was delayed until January 26, 1837. 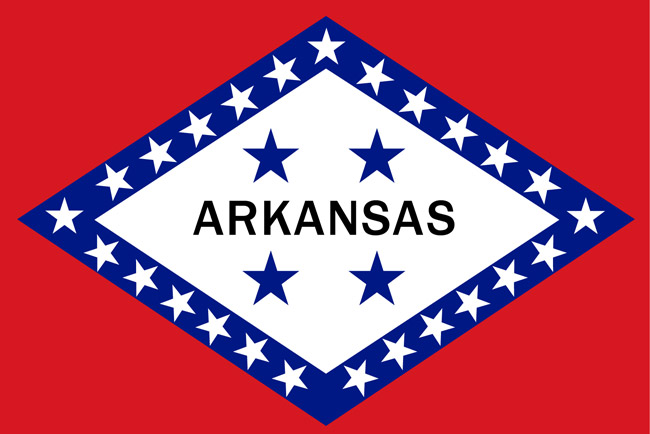 The Arkansas state flag is today flown over thousands of governmental and private locations throughout the state. The Arkansas Code lists a handful of specifications concerning the flag, including occasions upon which it may be flown at half-staff and requiring that it be flown at every public school in the state, displayed on the same pole as the national flag. Our office offers a booklet outlining protocol appropriate for display and use of the state flag. This protocol is not considered part of the Arkansas Code as such but incorporates elements of the U.S. Flag Code and reflects common usage throughout the states. In recent times there have been calls to change the meaning of the Confederate star on the flag or remove it completely back to the first official flag. 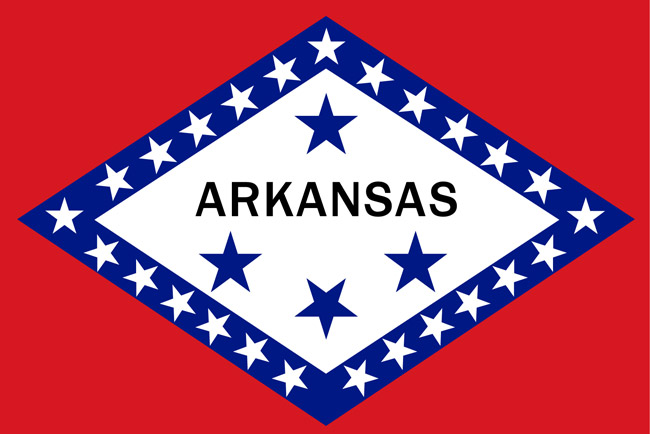